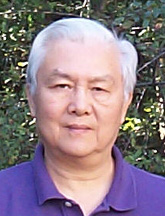 Stephen Hwa was born in Jiangsu, China in 1933 and emigrated to the U.S. in 1957 for graduate study. After receiving a doctorate degree in engineering, he worked for several companies, including Xerox in Rochester, NY.

In 1974, Hwa took his first Tai Chi class with Grand Master Young Wabu, a student of legendary master Wu Chien Chuan. Impressed by Young’s teaching and what Tai Chi could offer, Hwa made Tai Chi a part of his life and began his avid study of the discipline. In addition to learning from Young Wabu, he also participated in classes taught by Young’s daughter, Master Sonia Young.

Hwa became fascinated with the underlying principles that unified Tai Chi’s seemingly complex movements. He has distilled the knowledge he gained into the fundamental principles of classical Tai Chi with its unifying principle of Internal Discipline.

Hwa teaches Tai Chi to students and staff members at the University of Buffalo and also leads several Tai Chi classes at USA Karate in Fairport, New York. Master Hwa is now located in south Florida; he continues to teach classes there.

Young Wabu was born in Guangdong, China, in 1904. After attending college in Hong Kong, he established residence there and worked in the import business. Since a very early age, he had shown a great interest in and aptitude for martial arts. By his twenties, he had already mastered ten different types of external martial arts and established a reputation in the field.

In 1937, with the outbreak of war with Japan, the legendary Tai Chi Master Wu Chien Chuan left Shanghai, seeking the safety of Hong Kong. Young was then in charge of the martial art section of the South China Athletic Association and organizing a martial art exhibit. Hearing about Wu’s arrival, Young invited Wu to participate in the exhibit. The two men immediately found much in common. Young tested his martial art skills with Wu and found that he was completely dominated by Wu and unable to maintain his balance, no matter which kind of external martial art he used. At that point, Young gave up all he had learned before and became Wu’s student. He started from the very beginning. 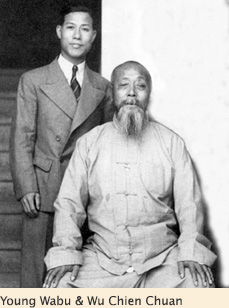 Young remembers the difficulty in trying to forget the deeply ingrained external martial arts he had learned and switch to the very different internal martial art. He dedicated four years of fulltime study with Wu before Wu returned to Shanghai in 1941. For a period, Wu stayed with him at his residence with the teaching and learning sessions going on day and night, everyday. The photograph of him and Wu was taken at his home in July 1938.

During that time, Wu bestowed upon Young another one of Wu’s treasure-the art of treating human ailment with internal energy, or Qi. The foundation of this treatment technique are internal energy, techniques of imparting energy (broad) and penetrating energy (focused). All these are originated from Tai Chi’s internal training and its martial art application training. Young excelled in the learning of this art.

Young started offering daily Tai Chi classes in Hong Kong. He was devoted to the cause of propagating Wu’s teaching. Later, he also taught classes in the U.S. when he would come to visit his daughter Sonia in Rochester, New York, for part of the year. A dedicated and insightful teacher, he melded modern thinking with traditional ways to make his lessons accessible to his students. His teaching emphasizes the building of a solid foundation with rigorous Tai Chi form practice.

At the same time, Young began to treat his close friends’ ailments with the treatment techniques learned from Wu. The results were very successful, and he started to build a reputation based on his healing ability. He turned that skill into a full-time profession with a very busy practice. Even high-level officials in the Hong Kong government sought help from him.

Before Hong Kong reverted back to China, Young emigrated to the U.S. and retired there, although he still teaches a few students to this day. Now in his nineties, he still has the complexion and energy of a young person. The picture of him was taken in June 2002 at the age of 98. 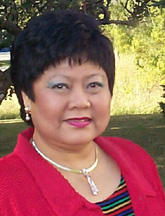 Sonia Young, the eldest child of Young Wabu, was born prematurely with severe complications. Doctors did not expect her to survive for long. When Wu Chien Chuan came to stay at her house, she was about a year and half old. She showed an interest in being in the room where her father and Wu practiced Tai Chi.

One day Wu told Young that he would cure his daughter and that he also wanted to teach Young his treatment technique. So Sonia’s condition became the first example Wu used to explain the art of treatment to Young. To this day, she is convinced that Wu had rescued her from her critical health problems.

At the age of three and half, Sonia began to learn the Tai Chi form from her father, who wanted to strengthen her health. She remembers that the enjoyable sensation of practicing Tai Chi enticed her to continue learning it even as a young child. She not only built a solid foundation in Tai Chi form practice but also developed into a healthy and athletic girl with an interest in the martial art applications of Tai Chi.

As a result, at age eleven, she was enrolled in the Hong Kong Chien Chuan T’ai Chi Ch’uan Academy under the tutelage of Master Wu Kung Yi, son of Wu Chien Chuan. At that time, Tai Chi martial art applications were a serious pursuit. Intense and full-out sparring were frequent and sometimes resulted in injury. Sonia still marvels at Wu Kung Yi’s ability to heal his students’ injuries. Wu once commented that any master leading a class as this should have the ability to treat and heal.

Sonia remained Wu’s student until she left for nursing school at the age of seventeen. After she graduated from the University of Minnesota with a degree in pathology, she moved to Rochester, New York, with her family. Her fascination with the art of treatment continued. Long-term visits from her father provided her with extended periods to learn this art from him.

In the mid nineteen seventies, she started to hold Tai Chi classes and tried her hand at treatment. By the eighties, her reputation in treatment and healing had attracted wide attention. Her clients included individuals as well as school sports groups. She also acted as a consultant on alternative treatments to the Mayo Clinic. Sonia is now dedicated to her practice full-time and no longer takes on new Tai Chi students.

Classical Tai Chi offers a unique set of Online Tai Chi Video Courses produced by Master Stephen Hwa, student of Grand Master Young Wabu. This set of online courses and this website are part of an effort to bring the splendor of Internal Discipline. 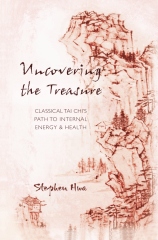 The true health benefits and the foundation for martial arts application of Tai Chi can only be achieved when the practitioner incorporates "Internal Discipline". That is, using internal movements and internal power to direct and empower external movements into Tai Chi practice. This book outlines a methodology and training routine to achieve this goal.